The ghostly stag flees, and I give chase, compelled as if by some enchantment or curse to follow. Drawn by the silent movement among the half-bare trees, like memory through dream, driven by the longing for that which is only half-glimpsed, half-imagined, an elusive intimacy, a wilderness so ancient it is unshakable, yet hidden, soaked into the bone. I am on the hunt for my god…

The Waincraft tradition names this god a Power, Father Wild, the primal power of Wildness itself. This deity was originally addressed as the Shaman-Father, but later the name was changed “in recognition of the plights of indigenous populations in which the term [shaman] originated.” There is an otherness to the Wild One, a seed of strangeness in the soul. It is anotherness so Other that it is even stranger to itself at times; and in experiencing itself as stranger, as Other, so it also participates in and shares the experience of the centered Self, looking out on its own elusive being stalking the edges of the liminal, in search of that which is everywhere and nowhere. Nothing is certain when you are face-to-face with the White Stag. That is the ambiguity of the term “shaman” as applied to this god, and the ambivalence the term provokes among modern Pagans. And so the hunt begins…

The etymological origins of the English word “shaman” are complicated (no, more complicated even than that), and arguably the term may not have originated among the Turkish-Tungusic speaking tribes in eastern Siberia, those indigenous populations that the Waincraft tradition refers to in its honest expression of respect. The English term “shaman” comes, through the German “Schamane,” from the Russian “sha’man” — a phonetic borrowing from the Evenki “šamán,” the word used among some of the indigenous peoples of eastern Siberia for their priests.

However, to say that the word “šamán” originated in and is native to Evenki or the Tungusic language family is inaccurate. As best as linguists can tell, the word “šamán” in the Evenki language is itself a phonetic borrowing from Chinese, “sha mén” (meaning, a Buddhist monk), and the Chinese term is a phonetic borrowing from Sanskrit (through Pali) of the word “sramana-s” (a religious devotee or ascetic). Since the Evenki term “šamán” is most accurately translated as “priest” rather than “monk,” it seems the term had already begun to change in meaning as a result of cross-cultural borrowing by the time it entered the Evenki language.

In discussing the constructed nature of terms like “shamanism,” author Mariko Namba Walter notes that, “When these terms are applied to non-Western communities, then, as in the study of shamanic art, the approach must be self-consciously critical and sensitive to diversity among indigenous and prehistoric communities.”* Walter continues:

[T]he generic shaman […] has currency, so long as (1) it is clear that it is not a fixed, nonnegotiable, value-free term, (2) indigenous art is not directly compared with Western art, and (3) the “art” in question is examined in its specific social context.

While considerations (1) and (3) seem reasonable enough, (2) drives a wedge, invoked by the specter of scare-quotes, that continues to separate “us” from “them,” their “art” from our art. In her book Druid, Shaman, Priest: Metaphors of Celtic Paganism, scholar Leslie Ellen Jones examines how these kinds of assumptions have influenced the academic study of the ancient Celts**:

Malcolm Chapman argues that the label “Celt” is in fact nothing more than a marker used by the civilized world of Greece and Rome — the center — to designate “those savages to the north and west of us” — the Other on the periphery. “Because ‘the Celts’ have consistently been peripheral,” he states, “they have always seemed backward and strange to the center, from which our theories of the social world were typically constructed”. […] However, the inherent fallacy of “center and periphery” anthropological analysis is that the anthropologist invariably places himself at the center and the people being studied at the periphery. The whole notion of conducting fieldwork is based on the premise that the anthropologist makes this journey outward, bringing back insight from the realms of the fringe.

We see this fallacy repeated in the deconstruction and use of (or refusal to use) the word “shaman.” To claim that the English term “shaman” originated among the indigenous tribes of Siberia — and not from the Chinese, or the Sanskrit — is to draw a sharp dividing line between what we consider to be legitimate and illegitimate instances of language borrowing. Further, drawing this line at this particular point in history highlights Russian imperialism but ignores the extensive contact of Siberian indigenous tribes with Chinese culture prior to their contact with Western colonial powers (during which the Tungus and Mongolian peoples were just as often aggressors and conquerors as they were those being conquered).

In other words, this interpretation of the word “shaman” only serves to reinforce a version of history defined by the Western/European perspective, in which Russia is a competing and/or allied imperial power, and indigenous peoples are assumed to be culturally isolated, unsophisticated and perpetually in the process of being conquered and disappearing. This version of history is most often put forward by the very Western academics who are themselves striving to be both accurate and sensitive to the cultures they’re studying. Yet, as Jones points out, they also often operate from the assumption of a “center and periphery” worldview in which the studied cultures are peripheral — the eternally marginalized Other. There is an irony in the fact that the modern Pagan’s desire to avoid using the word “shaman” out of respect for the indigenous peoples of Siberia ultimately rests on a foundation of Western academic navel-gazing which nevertheless (perhaps inevitably) perpetuates certain Western-centric biases.

Do we give up the hunt? Do we retreat into conceptual titles — such as Wildness, the Horned One, Lord of Animals — and risk losing the immediacy and intimacy of the god? Or do we seek out the culture-specific names — such as Gwyn ap Nudd, Herne, or Cernunnos, itself a reconstructed pan-Celtic etymological puzzle — and in doing so lose touch with the thrilling pulse of shared relationship that beats in our veins? I don’t know what to think — except that this absurdly complicated and almost-impossible-to-reconcile history of a name actually reflects the nature of this god (who might, perhaps, be well pleased to embrace the word “shaman,” if only to lampshade this complexity). In a sense, as a modern American Pagan, it will forever be impossible for me to “think my way out” of my cultural heritage. The navel-gazing of educated and culturally sensitive Western academics can still only take us so far. We cannot even safely assume that the indigenous peoples themselves can provide us with a clear-cut answer, for to do so would be to project onto them an overly simplistic, monolithic, reductionist view of these diverse tribes, as if they speak with a single voice, instead of acknowledging that they themselves contain diverse and unique individuals each with their own opinions and perspectives. There may be no straight-forward consensus.

My husband the linguist suggests, “Still, it might be better if we could find a native English word for the same idea…” and in the very same breath asks, “But, then, what is ‘native English’ anyway?” The word shaman entered the English language nearly 500 years ago. There are certainly plenty of words that are more recent borrowings which we consider to be unproblematically “native English” without batting an eye, usually due to our own ignorance about where those words come from. (My favorite — which is to say, most tragic — example is the word bikini, the skimpy two-piece bathing suit named after an island where the U.S. carried out nuclear bomb testing starting in the 1940s, after the forced relocation of its original inhabitants to another island where many of them later starved to death, unable ever to return home. Ad campaigns for the new swimsuit style bragged that it was “so hot, it’s radioactive!”)

How long does a word need to be incorporated into the English language in order to be considered “native”? Indeed, it is our very knowledge of the complicated history of the word shaman — highlighted and preserved by the very Western academics so often accused of its appropriation and misuse — that prevents us from considering it to be English in any uncomplicated way. But then, this is true of almost any word. English, especially American English, is particularly good at incorporating and borrowing from diverse other languages, and these borrowings are not always negative or the result of imperial insensitivity. The more knowledge we have — the more linguists can accurately trace the complex histories of words — the more English ceases to be a discrete and easily defined category. The idea of a “native English” seems to falter and lose meaning.

The language I speak is not even my language anymore. I am othered from my own native tongue.

Our knowledge, instead of leading us to certainty, betrays us — guiding us deeper into the confused complexity of the forest, the dark wilds of unknowing. This is holy bewilderment. This is the horizon that is forever receding and can never be reached; the periphery that is everywhere and nowhere. We cannot move from the center to the periphery without, in some way, bringing the center with us. We cannot reconcile ourselves to the perspective of the Other without becoming Other to our own selves and our own perspective — and yet, even this is not really to unite with the Other in its perception of itself, precisely because the Other is not other to itself. And so the very act of Othering ourselves in order to understand that perspective undermines our ability to do so.

We find ourselves spinning in circles. We look for a centered self that isn’t there, and when we find it, it is deeply bizarre. We are confronted by an Other that can never be centered or normalized, and because of the very fact that we cannot pin it down, we experience that Otherness as everywhere.

This is the nature of the hunt. It is the call of the Wild One.

Welcome to the chase… 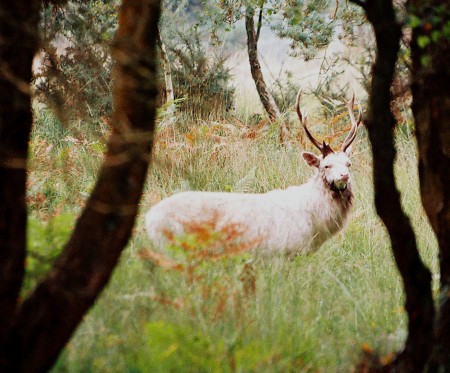 *from Shamanism: An Encyclopedia of World Beliefs, Practices, and Culture, pp. 21-22

6 thoughts on “The Wild Hunt for the Other God”