Part of my identity as someone with a Celtic spirituality is the inescapable fact of exile. I am not only a person with Irish heritage living in the multicultural milieu of modern America, but I am also a polytheist and Pagan trying to connect with my ancestors across millennia of lost traditions from my place in a monotheistic, Abrahamic mainstream culture.

It is within that diaspora — that exile — that I will have to discover, or forge, an authentic spiritual life. 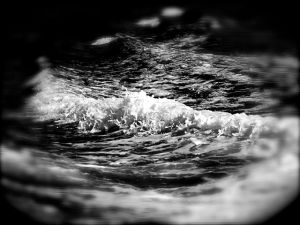 My ancestors were from islands. The ridged, tough knuckles of earth thrust out of a wide, hungry, churning ocean. The gathered-together lands. Thick forested valleys, rolling meadowy hills. Huge slabs of granite flecked with crystalline mica catching the sunlight in carved spirals and shadowy dolmens half overgrown with moss where once their graves dug deep to meet the Otherworld to join the Shining Folk. Here and there, the bones of the place shown chalk white beneath the damp rot of rich soil dropping off into bluffs that raced to meet the sea in a single quick-caught breath. These islands where my ancestors lived braced and breathed deep as wave after wave of invaders washed across their rough and intricate shores like storms blown in by the ocean winds. That is always the way with islands, after all.

Eventually, my ancestors left. Some of them came from Wales and settled in the dusty old Appalachians of the New World, digging coal from the belly of the earth to burn for a little light and heat. Some of them were driven from Ireland by famine, near-poverty, disease and religious persecution, to a country that promised prosperity, freedom and a chance to begin again. A whole continent stretched out before them, wide and awake to this kind of pilgrimage.

And what about the Shining Folk, the ancient gods who lived in the earth, rooted in the emerald-mantled lands on the other side of the ocean? The gods made the journey in memory only, as saints and fairy tales and old legends for children’s books. The names of places in unfamiliar languages were clumsy and awkward on the tongue, the places themselves slowly forgotten. What bend in the river was the goddess Boann’s sorrow? What dip in the land hid the lovers Diarmuid and Gráinne in the heather? Where stands Tristan’s stone, or Brigid’s oak? What is the city of sovereignty where the four directions meet?

The word insular comes from the word meaning island. The word exile from the Latin, to wander away.

I’ve lived all my life landlocked in the foothills of those dusty old mountains where my ancestors once set down to rest in their wandering. My family is part of what’s known as the Celtic diaspora, a word that speaks to the dispersal of a people from their homeland like seeds cast out for the winds to carry, putting down new roots where they can. I live in a wide country, as wide as a continent spanning vast, immense, full of forests and deserts and grasslands and mountain ranges between two long shores. This is the kind of place that my ancestors discovered generations ago, who once were from the gathered-together lands.

It is a challenge to live in exile from the home of my ancestors and the dwelling place of my gods. The gods of this land where I live now still weep and rage over the slow and heart-sick loss of their own children, the indigenous nations of Iroquois and Navajo and Chinook and so many others whose ghosts wander in an exile of their own across the broken earth. When I speak to the gods of this land where I live now, sometimes there is a deep shame and grief in that prayer, full of penitence and regret for what my ancestors have done. When I pray to the ancient gods of my ancestors, who suffered wandering and exile of their own, sometimes there is only silence in return.

As someone born and raised in the United States, I have no real cultural heritage except the heritage of a multicultural, multiracial, multifaith modern America. It is a culture that has borrowed ruthlessly and often crassly from the peoples it has colonized and occupied. It is a culture molded out of appropriation and misappropriation, disrespect and consumerism, and far too much war and militarism for an anarcho-mystic poet like me.

And yet, in this wide open space, there is so much room to wander. That is a blessing. My ancestors, like the ancestors of so many other modern Americans, were often extremely insular in their attitudes: one true faith, one right way, one blessed nation with a manifest destiny. Such insular thinking — dividing and separating “us” from “them,” the sheep from the goats, the righteous from the damned, the rich from the poor, the citizen from the alien — once thought to conquer the whole world. But here in exile, here in our wandering-away, we discovered a land too vast and unconquerable to be that small an island. Here in this wide country, many faiths rub elbows and new spiritual traditions are born out of the most unlikely marriages. The old gods are revived in new forms. The stories take on new shapes and there are new stories, too: the stories of science, the stories of jazz, the stories of technology, invention and art.

If we are here, in part, to learn the burdens and flaws of ancestry that we carry in our blood and to restore ourselves and our descendants to a place of freedom, balance and harmonious relationship with the world — then maybe this exile, this wandering-away from the islands we called home, is really a kind of sacred work.

One of its meanings is exile, banishment. When in the ancient Book of Invasions the Sons of Mil invade the emerald isle, the druids of the Tuatha de Danann order them back beyond the ninth wave from which they must return to claim their rightful sovereignty over the land. People fleeing the Irish Potato Famine of the mid-1800s were said to be journeying beyond the ninth wave to seek new lives and new hope in America and Canada, entering exile and diaspora at the price of their lives and the lives of their children.

But there is another meaning, too. In Irish tradition there is the imramma, the sacred sea voyage that takes the wanderer on a soul-journey beyond the ninth wave to mysterious lands — islands of youth, of summer, of apples, of strange creatures and lovely women, and all the many shimmering dark-deep mysteries of the Otherworld.

To go beyond the ninth wave — to wander-away into exile — is to go on a pilgrimage in search of the gods themselves, to seek our ancestors of both blood and spirit where they dwell. To reconnect, to weave a new way forward, to make that pilgrimage — maybe that is not so bad a heritage after all.

This post is part of the Pagan Blog Project 2012.
Why not join in?

4 thoughts on “Exile: Beyond the Ninth Wave”