They say he did it out of boredom, but boredom is catching and soon the entire village had grown bored of his mischievous tricks. Each time he cried out that the wolf had come, and the villagers rushed to his aid only to discover no wolf in sight, they grew more annoyed, more disdainful — and more complacent. 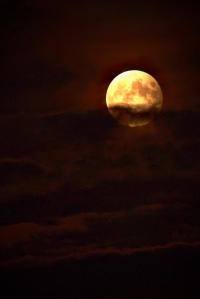 To the boy, perhaps, they came to resemble the sheep themselves. Their lazy eyes gazing pleasantly out across the safe, green pastures, content to linger all day in the warm sun watching the gnats coalesce in gently humming clouds that turned and dissipated with the breeze. The breeze itself was a lazy, meandering thing — not brisk, not bracing, not even enough to shift the leaves on the tree above where the boy sat, restless, watching.

Perhaps that was why each time he cried out Wolf! the imagined beast was more terrible and monstrous than before. Its teeth and claws like blades that sliced the air, he cried, and its eyes like sharpened flames that pierced the dark. He raised his voice to imitate its howl, a chilling death-wail that could send shivers to the bone. Perhaps the boy imagined that only such a great and terrifying force could shake the thick wool of dullness from the villagers’ eyes. Each night he cried out Wolf! he felt the power rise in him, burning off the heavy boredom that seemed to cling to him by day. But each time, after their momentary fear, the villagers would only scold him for disrupting such a peaceful night with lies, and then they would drift off back to bed.

Perhaps this was why, when the wolf finally came, the boy could hardly recognize it for what it was. Just a dark, quick shadow moving with purpose and self-possession beneath the trees — snatching a single sheep — and then it was gone, before the boy had time to even raise the alarm. It was then that the boy saw his last hope snatched away, the threat reduced at last to the simple wildness it was. And the power rose up in him, like a terrible fire.

It’s said they found him in the morning, covered in the blood of the slaughtered animals. They say he was weeping, and for the first time there was real fear in his eyes.

“It was the wolf,” he cried in a hoarse, inhuman voice. “There was a wolf that came.”

And the villagers exchanged uneasy glances, knowing it was true.

3 thoughts on “The Boy Who Cried Wolf”