Tidepooling is a practice in patient observation. It’s also a reminder that some things happen in their own sweet time.

That’s the thing about low tide. Sun, moon and earth turn through the steps of their celestial dance, and once in a while you get lucky and the three of them meet just right in a moment of revelation. You have to be ready.

Here on the Salish Sea (which includes Puget Sound, the Strait of Juan de Fuca and Canada’s Georgia Strait), the lowest tide of the year usually occurs around the full moon nearest the summer solstice. The earth, with its axial tilt, leans in towards the sun for a kiss on the longest day. The moon waxes to full, exerting its own pull of gravity in the opposite direction. And the earth’s oceans — rippling out around her like a full blue skirt — rise and fall in mighty tides offering a glimpse of dark, secret places usually hidden from sight. 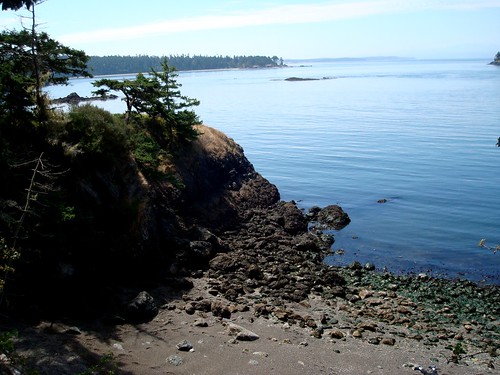 It’s funny that my mind should be drawn to dark places and hidden treasures on days suffused with so much light. But sure enough, I find myself longing to wander down along the knobbly shoreline of Puget Sound and poke around under rocks. 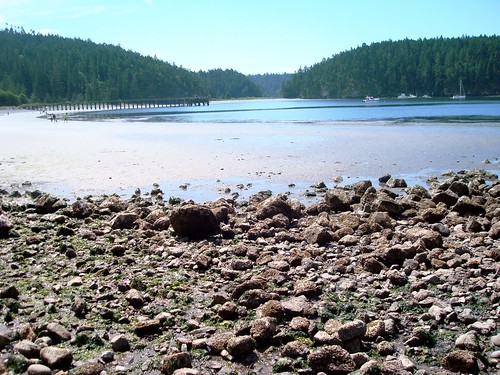 This year was especially lucky. The full moon (a “super moon,” apparently, whatever that is) happened to fall on a weekend, so Jeff and I had the chance to head north to Deception Pass State Park to spend the day hunching over algae-slick rocks and peering into damp crevices in search of intertidal treasures.

There are so many different ways to hide.

At Bowman Bay, it was impossible to take a step among the exposed rocks without catching a glimpse of scurrying movement out of the corner of your eye. A casual glance out across the beach, and you might think there was nothing to see but slimy boulders and scattered pebbles. A closer look reveals hundreds of tiny, well-camouflaged critters dashing from nook to cranny, or burrowing themselves in the sand. 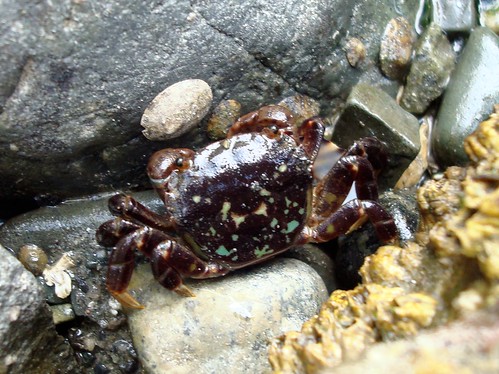 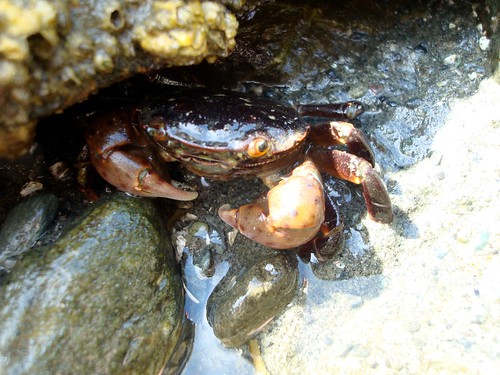 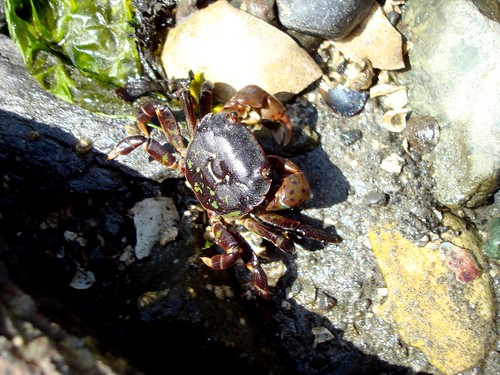 Purple shore crabs (Hemigrapsus nudus) are especially common along the coast of the Salish Sea, with their mottled carapaces and spotted claws helping them to blend in among the shadows of kelp fronds, sea lettuce, shell fragments and wave-smoothed stones on the rocky shore. Another common species, the Green shore crab (H. oregonensis, also sometimes called the Oregon shore crab), is similar to its cousin — the same size and square body shape, with three “teeth” on its carapace behind each eye — but with tiny bristly hairs on its legs and spotless claws.

This little guy was particularly striking and held still long enough for me take quite a few pictures. 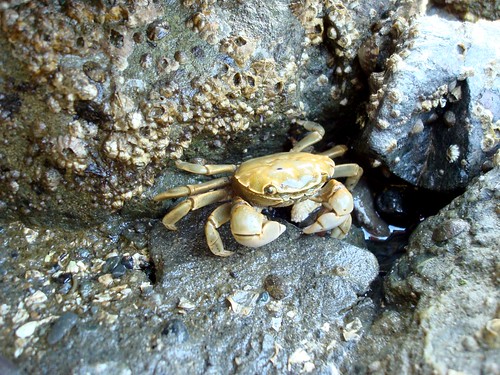 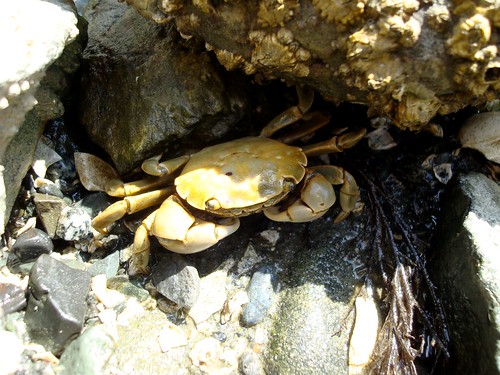 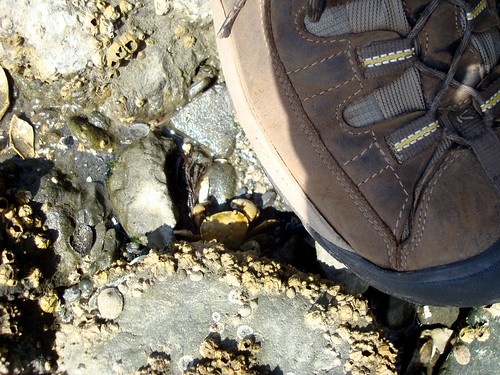 (This is where working with animal totems can get tricky, too. While some folks believe that every species has its own specific totem (no pun intended!), the natural world is far more complex than our systems and categories suggest. Scientists are constantly re-classifying organisms based on new ecological insights and DNA evidence. In my experience, some totems — like Shore Crab — embrace multiple related species that share many of the same physical, behavioral and ecological traits. Shore Crab is tiny but tough, and although not naturally aggressive can be quite fierce in self-defense.)

Although these little marvels can stand out and stand up for themselves when backed into a corner, most of the time they prefer to remain crouched under rocks or buried in sand where they can hide from potential predators while staying cool and moist, waiting for the tides to turn. Even on a beach brimming with crabs, sometimes the only way you can spot them is by relaxing your gaze and watching for movement.

Tucking her legs in under her protective shell, this Green shore crab nestling down in the muck becomes almost indistinguishable from the surrounding pebbles: 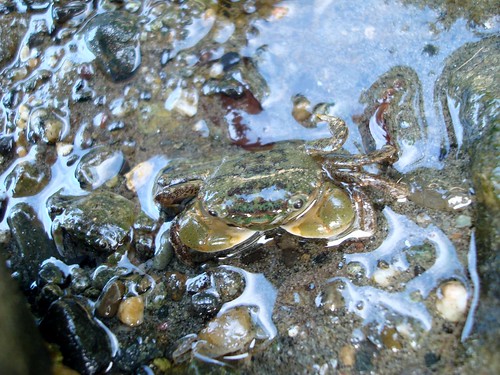 While low tide might be the perfect time for humans to explore the beach, the retreating water presents serious challenges for the creatures that live along the shore, many of whom develop strategies for coping with the intermittent absence of the life-sustaining waters that offer them protection and access to food during high tide. The most obvious and abundant of these — and most likely to be overlooked — are the barnacles.

At Rosario Beach, the difference in water levels marking high and low tides was especially obvious. Darker and lighter stripes across the rocks show where different species of barnacles have colonized every available surface, thriving especially higher up and on boulders facing the more energetic wave action of open waters — environments too harsh for some of our softer, squishier intertidal friends. 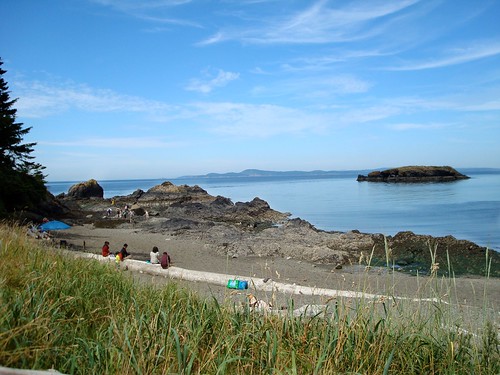 During low tide, barnacles close themselves up inside their protective shells along with a small amount of seawater — kind of like an astronaut inside his space suit using an oxygen tank to breathe. Some of the hardiest barnacles, living in the highest areas of the intertidal zone, can go days or even weeks without being immersed in water. If you listen, you can actually hear the quiet gurgling noises of these creatures biding their time inside their clamped-tight shells.

It’s easy to think of barnacles as boring, since most of the time we see them, they’re hunkered down with a virtual “do not disturb” sign hung on their door. If you can find any that are open in a shallow tidepool, though, watching barnacles feed is a delight. Those feathery fronds, rhythmically waving and pulsing as they gather plankton, are actually their feet! After the free-swimming larval stage, adult barnacles glue themselves to rocks upside-down and spend the rest of their lives in a permanent headstand.

With some patience and close observation, even barnacles’ outer shells can tell a story of amazing variety — not to mention, admirably stubborn survival.

Compared to the brownish and yellowish acorn barnacles (Chthamalus dalli) in the pictures of shore crabs above, these young thatched barnacles (Semibalanus cariosus) reminded me of tiny, twinkling stars against the dark surface of this rock: 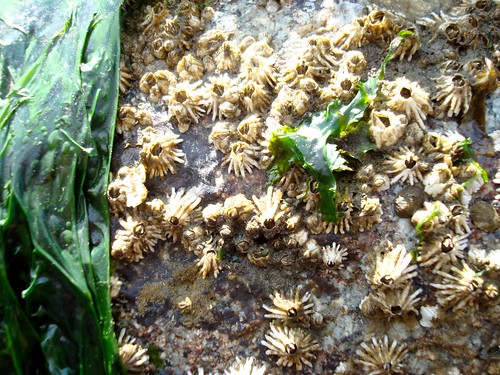 Like other crustaceans (such as crabs and lobsters), barnacles shed their exoskeletons as they grow larger — but the protective outer shells surrounding them will remain fixed and must be continually renovated and expanded to make room for the growing creature inside. The shells of thatched barnacles can get up to 2 inches wide and several inches tall, with the “thatching” becoming more pronounced, forming textured ridges all along their surface… 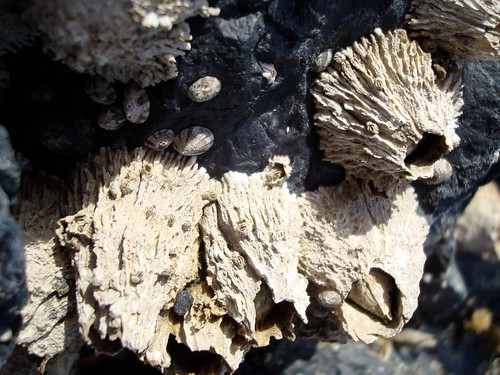 ….but even the hard, calcified shell is no match for the relentless eroding forces of the ocean waves, which eventually leave it pitted and pock-marked, looking like some kind of desolate lunar landscape. 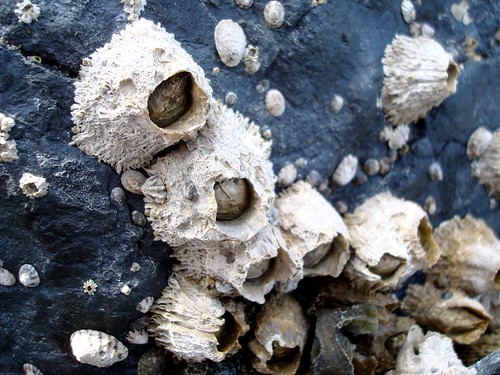 When I told my parents that we’d seen more than twenty different identifiable species of plants, animals and algae during our tidepooling at Deception Pass, they were suitably impressed. Probably they were imagining the stunning visual variety of tropical coral reefs, like you might see on the Discovery Channel, not the minute differences that distinguish different kinds of barnacles and crabs. (And limpets! Look again at that last picture — among the barnacles, you can see no less than three different species of limpet, a type of single-shelled sea snail.)

Still, there are some beautiful sights to see, if you know how and where to look. The squishy, donut-shaped blobs next to these barnacles might not seem all that impressive…. 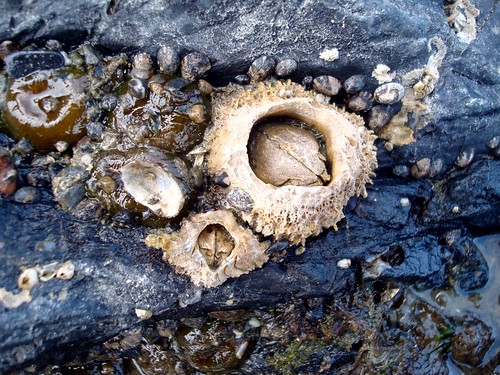 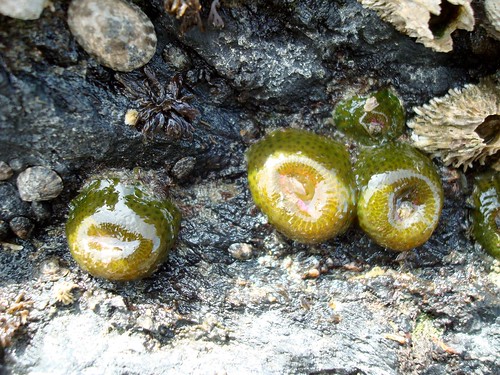 …but when submerged in water, they blossom into the tiny pink-tipped flowers of the aggregating anemone (Anthopleura elegantissima, also known as the — wait for it — pink-tipped green anemone, of course!). 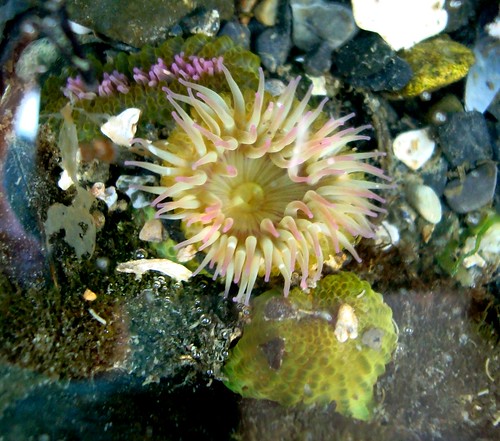 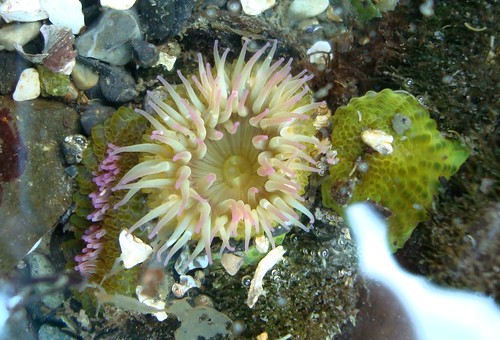 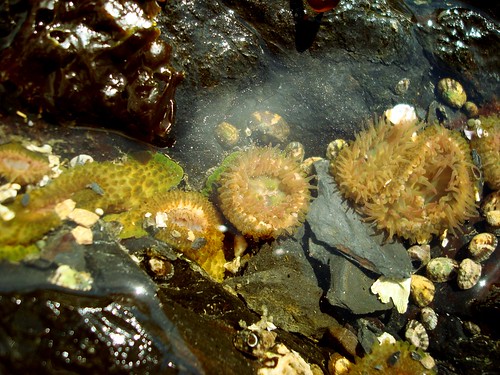 Aside from its beauty, this anemone is fascinating for a couple of reasons. First, if you see a large clump of these anemones living together, what you’re actually looking at is a group of genetically identical clones. The aggregating anemone reproduces asexually by literally tearing itself in half once it reaches a certain size, to produce two new individuals. Colonies of these clones will actively defend territory against anemones from another colony — you can often see the dividing line between colonies, an empty “neutral zone” defended by especially tough anemones along each border that will use their tentacles to attack and injure any intruding neighbors. (This anemone can also reproduce sexually — although the process is a somewhat impersonal one, spewing eggs and sperm into the surrounding water and allowing the random chance of currents to do most of the work. Compare this to the similarly sessile barnacle, a hermaphrodite that actively seeks out nearby mates using a penis that is one of the longest in the world relative to its body size! And you thought barnacles were boring!)

Belying their competitive nature, however, these anemones also live symbiotically with two different types of algae, which is what gives the anemone its distinctive green color. (Anemones without algae are grayish-white.) Algae provides an anemone with additional nutrients; in exchange, the anemone will bend to reposition itself so that the algae can access the sunlight it needs for photosynthesis.

Aside from these relatively common anemones and barnacles, the lowest tide of the year also reveals its own array of rare treasures. On the underside of one particularly large rock, for instance… 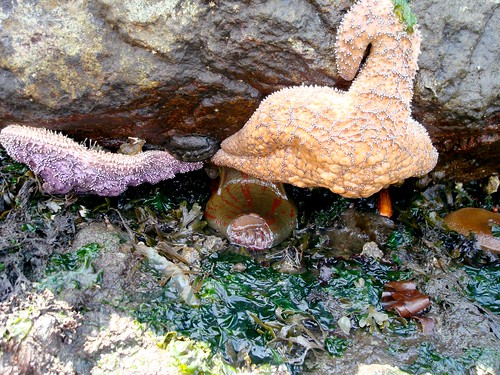 …we stole a peek at two large Ochre sea stars (Pisaster ochraceus), and between them the huge, floppy form of a closed Painted anemone (Urticina crassicornis)…. 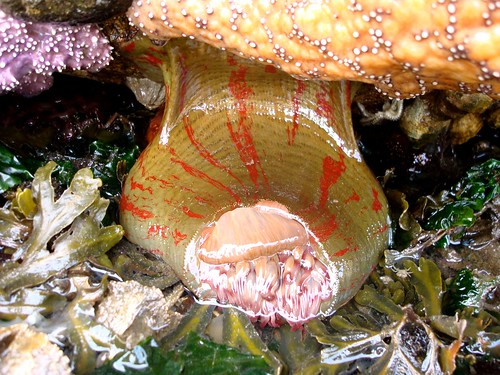 …as well as these two bright orange sea cucumbers (Cucumaria miniata) nestled down amongst the seaweed beneath a group of Frilled dogwinkles (Nucella lamellosa) hanging out on the rock above: 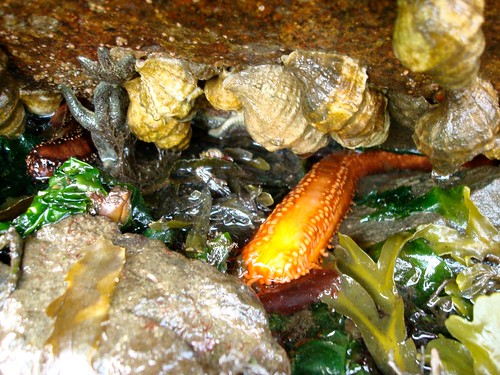 Dogwinkles (also called dog whelks) are another favorite of mine. They come in an array of colors, shapes and textures depending on species, though often these differences are obscured by a uniform coating of muck and algae that help them blend in with their surroundings: 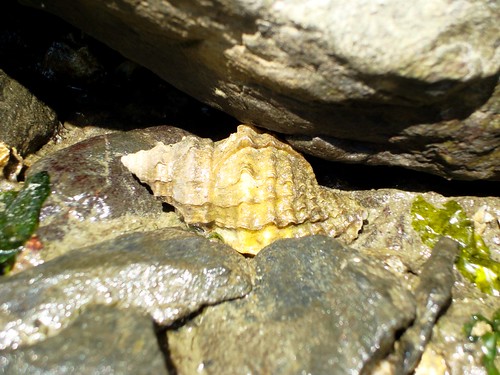 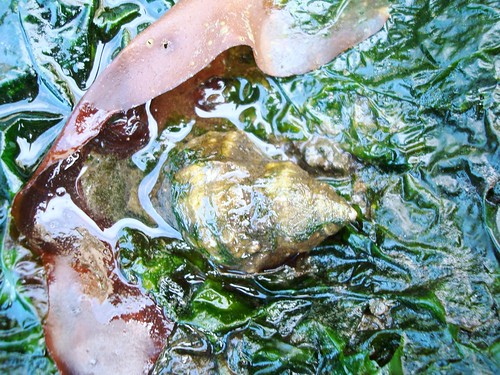 When I lead groups of school kids on beach walks as part of my volunteer work, it’s especially fun to point out whelk eggs. Here, you can see a cluster of the squat, vase-like eggs of the Northern striped dogwinkle (N. ostrina), distinct from the eggs of other whelks which tend to be thinner and look more like grains of rice: 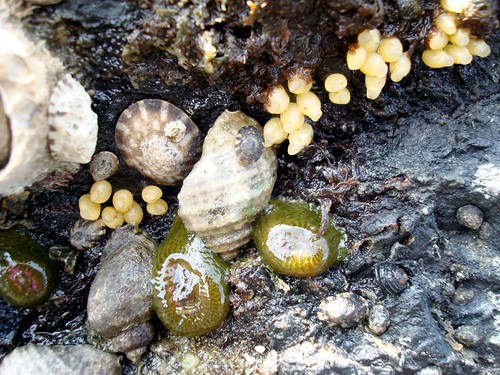 Our trip to Deception Pass also included a couple of thrilling first-time sightings for me. Next to this group of parchment tube worms (probably Northern feather duster worms, Eudistylia vancouveri, or a related species), I spotted a Purple sea urchin (Strongylocentrotus purpuratus). Although it was almost impossible to see in person, wedged in quite snugly under a low-hanging rock, I was able to get a picture of it thanks to my camera’s zoom lens: 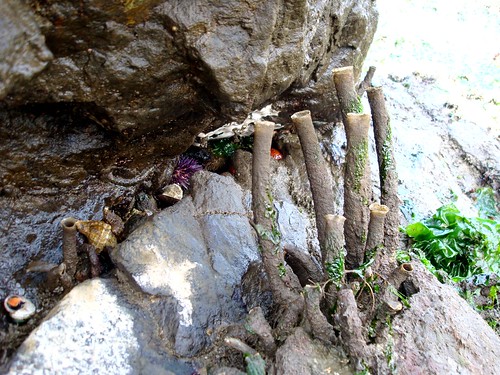 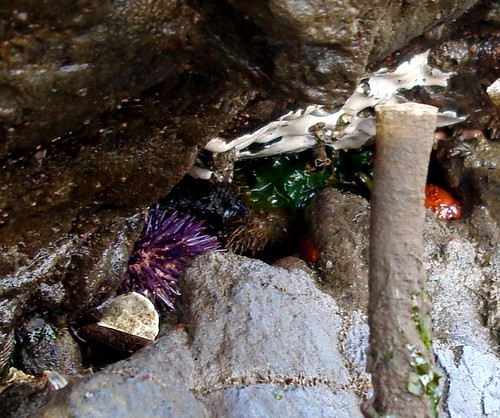 And in one deep, dark crevice — the wild and weird-looking California sea cucumber (Parastichopus californicus), a creature more than a foot long and covered with bumps and spines that it uses to capture its food: 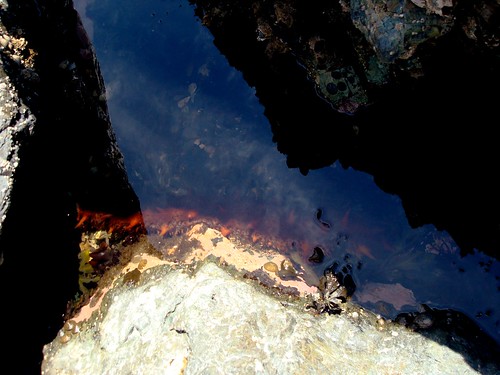 There were even some creatures that I was only able to identify after the fact, while flipping through field guides in the comfort of my living room. At the beach, I’d spent a good five minutes poking and prodding at what seemed to be a very oddly-shaped protrusion of rock before giving up and deciding it must just be a quirk of geology.

Back home again, I had a true head-desk moment when I stumbled across some photographs of the Black leather chiton (Katharina tunicata) and realized what I’d been examining had been a living but cleverly disguised critter after all!

Of course, I hadn’t bothered to take any pictures. As you can see in these photographs, it’s not like the Black leather chiton is exactly known for its stunning beauty: 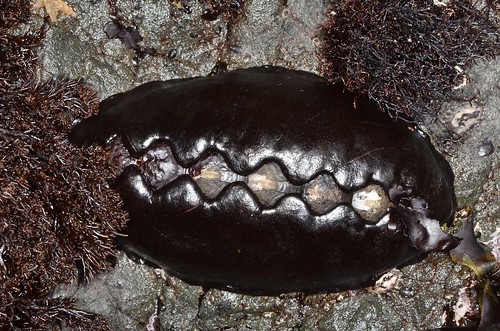 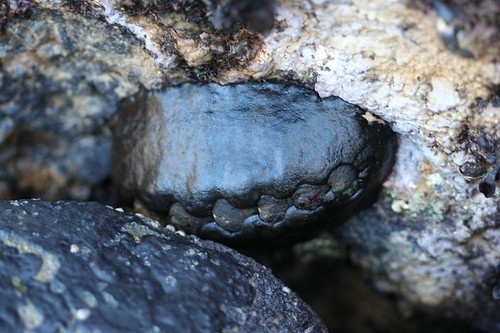 Still, I’m humbled to realize how oblivious I can sometimes be to the wonders of the natural world all around me. And what treasures might yet be hiding right in front of me, in plain sight. 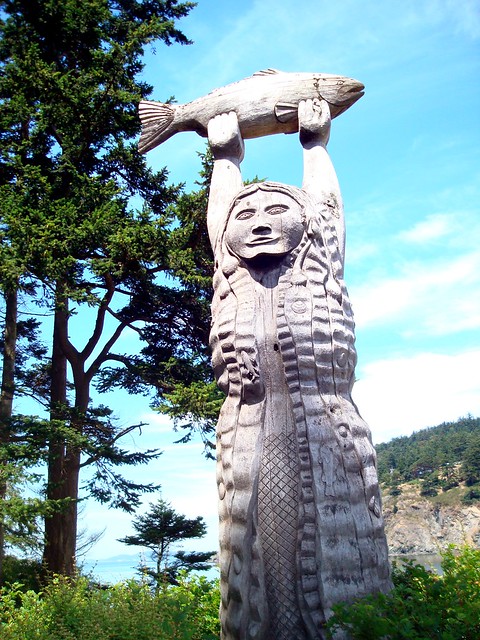