It’s no wonder that bioregionalism has its roots in the Pacific Northwest. Just a short trip from Seattle in almost any direction you’ll find astoundingly beautiful but vastly different kinds of wilderness — from the misty islands on the Salish Sea and the water-logged lowlands of Puget Sound Country to the old-growth forests of the Cascades, from the dry grasslands of eastern Washington to the temperate rainforests and subalpine meadows of the Olympics… 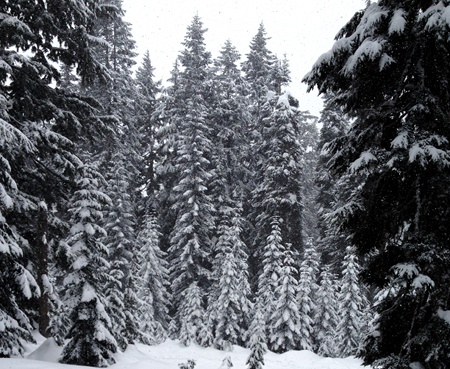 This winter, while most of the country hunkered down under the harsh hand of the polar vortex, here in Seattle we had unusually mild, dry weather — and only about an inch of snow, which melted overnight. But just an hour east of us in the Mount Baker-Snoqualmie National Forest that stretches along the western slope of the Cascades, dense groves of western hemlock and red-cedar found themselves buried under 8 – 10 feet of the fluffy white stuff. (Even still, the snow was late in coming this year — by December, the snowshoe hares were showing stark white in their winter coats against the dark background of the bare underbrush. By January, there were more than a few plump, well-satisfied bobcats to be found in the forest.)

It’s such a blessing to live in a city of mild, wet winters that’s close enough to the mountains that I can escape into a snowy wonderland for a weekend. 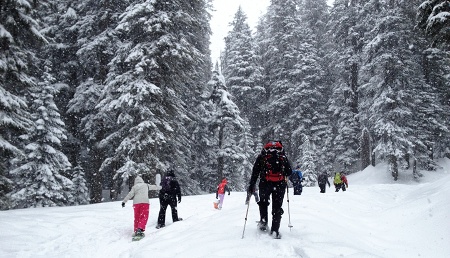 Last week, Jeff and I had the chance to join a small group of hikers and an enthusiastic nature guide to explore some of the old-growth forests near Snoqualmie Pass. It was my first time on snowshoes — but I can understand why people quickly find themselves addicted! 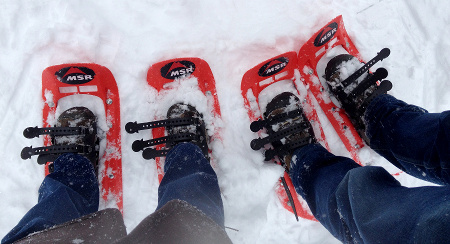 Here’s our guide, as he helps us put on our gear and instructs us in the best ways to practice walking: 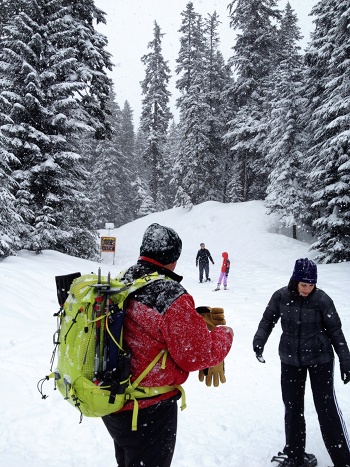 (We practiced our skills by racing in an empty parking lot filled with deep snowdrifts — I came in second place! Not bad for a first-timer.)

Snowshoeing opens up possibilities for exploration that ordinary hiking can’t. As our guide led us through stands of towering evergreens, he reminisced about how different the landscape is in summer — soggy, uneven ground etched with dozens of tiny creeks, with massive thickets of thorny devil’s club preventing any hiker from wandering too far off the trail. But with a sturdy pair of snowshoes and eight feet of snow, winter is the perfect time to rise above those obstacles and move deeper into the heart of the forest. 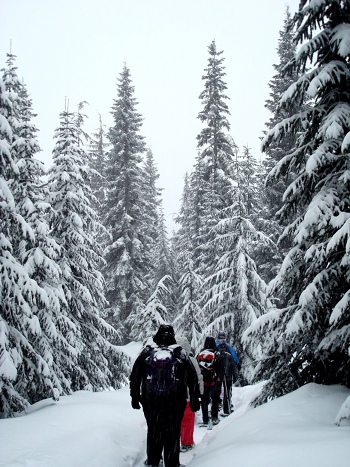 We stood beneath the thick, snow-laden limbs of a western hemlock more than 700 years old — a giant of the forest that is completely inaccessible to hikers without the cover that winter snow provides. 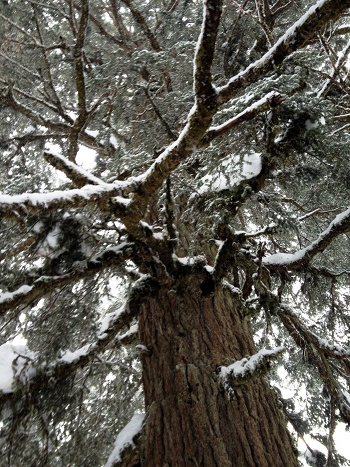 Of course, the snow can also be deceptive. Trails that seem obvious at first can quickly disappear or lead you in circles following the tracks of a confused hiker who passed this way before you. Plus, it’s easy to forget that you’re several feet above solid ground. Is this an abandoned snowman built by an earlier explorer, or the top of a tree sticking up above the snow drift? 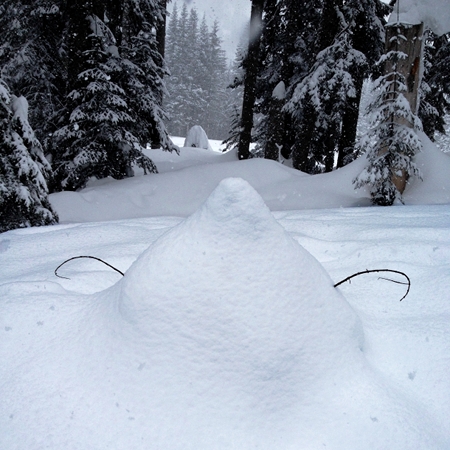 Even a lush old-growth forest is transformed into a kind of desert landscape by snow. As the poem goes, Water, water everywhere, but not a drop to drink… With streams frozen over and buried beneath several feet of snow, access to water is limited. A human being would die of hypothermia if she tried to eat enough snow to quench her thirst. 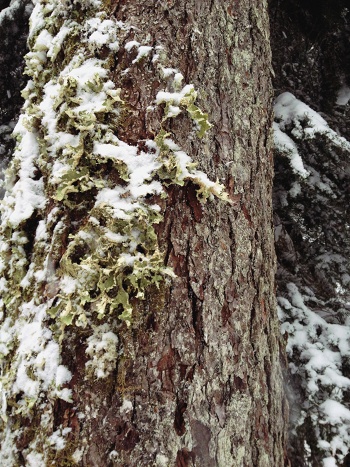 Lungwort lichen (named after its lung tissue-like appearance) is an indicator species that ecologists use to gauge the health, vitality and age of an old-growth forest. But this lichen is also a keystone species that helps to support a wide variety of animal life, providing food, water and nesting material for birds and mammals during cold winter months. Its leafy lobes create tiny cups and crevices that capture snowfall, which melts in the sun to form caches of drinkable water. Birds and chipmunks can often be seen delicately sipping from these tiny pools, while larger mammals — from snowshoe hares to elk — enjoy the extra moisture as they nibble on the greens.

(This process of slowing down the progress of falling precipitation is known as interception, and it happens with rain as well as snow. In a healthy forest ecosystem, dense tree canopies protect the land below, intercepting up to 80% of falling rain before it ever hits the ground. In this way, interception prevents erosion and flash flooding, moderates temperatures through increased water evaporation, and filters storm runoff through epiphytic plants like ferns and mosses as well as leaf litter on the forest floor and the extensive root systems beneath.)

Metaphors abound in the forest, where lessons of patience, endurance, strength, fragility and interdependence are made inescapably clear.

This massive western red-cedar is nearly a thousand years old. It was struck by lightning more than one hundred years ago, opening a rift in its heartwood that runs the full length of the tree. And yet it continues to survive, even thrive, thanks to the thin layer of cambium just beneath its bark that carries nutrients and water between roots and branches. But even this huge, ancient life is fragile in its own way. Although able to withstand a lightning strike, it would soon starve and die if someone were to tie off a simple nylon cord around its base completely cutting off the thin layer of living tissue.

High up on another red-cedar, these rectangle-shaped holes carved out by a pileated woodpecker have started to heal after a few years. 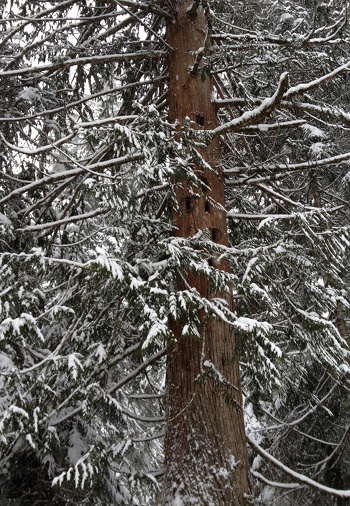 The pileated woodpecker is another keystone species, modifying the surrounding environment in important ways. Although many woodpeckers carve out nesting and feeding holes in both living trees and dead snags, providing shelter for other birds and small mammals who take up residence after the woodpecker’s moved on — the pileated is a particularly large bird, about the size of a crow, adept at digging particularly large, deep holes and exposing insects and larvae usually hidden too deep inside the wood for other animals to access. Its careful but relentless excavation of decaying snags also speeds the decomposition process, returning nutrients to the soil to the benefit of surrounding plant life.

From another angle, evidence of the pileated woodpecker’s return after several years of absence: among the half-healed holes, the pale scratch marks of a fresh hole just started a week earlier. 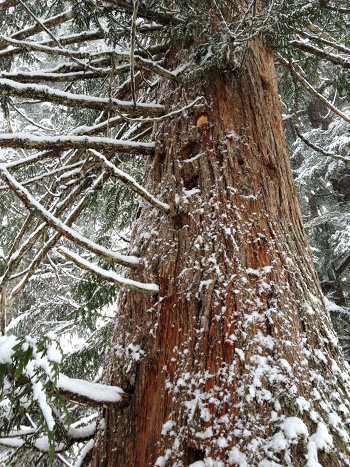 We weren’t luckily enough to spot any pileated woodpeckers out and about during our hike, but we did spot a gorgeous raven, his black-feathered form gliding silently and sleekly through the snowfall among the trees. (He shyly hid from my camera by ducking behind a low-hanging branch when I tried to take his picture.) No plump bobcats made their presence known, although more than once we came across the tracks of a snowshoe hare bounding across the drifts. (No pictures of these, either — trying to get the right exposure on your camera phone for animal tracks in white snow on an overcast day is… a challenge to say the least!)

Every hike in the woods is an opportunity to learn. For much of the winter, I’ve been reading and researching voraciously and digging deeper into my spiritual practice to cultivate a more intimate relationship with the sacred keystone plants and animals who shape and bless the land where I live.

Yet there are things that no amount of reading or ritual work can teach you. The exhilarating bite of snowflakes falling on your cheek. The scent of red-cedar boughs hanging low with snow across the trail. The looming presence of the ancient hemlock, its branches a tangle of shadow and light arching above you. Not a totem or visualized spirit guide, but this raven — right here, right now, embodied in all its glistening black glory and inescapably physical — and this scraggly batch of old man’s beard lichen with snow melting into crystalline drops of water clinging to its fringed edge, catching the wan sunlight that glints now and then through the clouds.

To walk is itself a kind of ritual, a practice that changes us in subtle and significant ways. To move through the land, we have to be attentive and responsive to it. To survive these cold months, it’s not enough to stay hunched in front of our computer screens all day long theorizing and debating. We must become apprentices of this goddess, Winter — to truly know her and her work, we must go out to meet her beneath the trees.

2 thoughts on “Apprentice to Winter: Snowshoeing in an Old-Growth Forest”