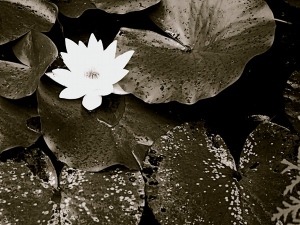 As a pacifist and peacemaker, it’s been a long time since I felt comfortable celebrating the death of another human being. In fact, I’m not sure I can think of a time when I was inspired to rejoice in death — even the death of an enemy, a threat to those that I love, respect or feel responsible for protecting.

Still, bin Laden’s death has me looking carefully at my own reactions and wondering a bit at how out of sync they seem to be with so many others around me. There are more than a few people I respect and admire who, while standing firm on principles of compassion and forgiveness, do still acknowledge that there is a part of them — an animal id rising up in triumph, or simply giddy with relief — that empathizes with those who might pump their fists in victory and joy. These people have my admiration all the more for having the self-awareness and integrity to acknowledge those less than flattering instincts, those parts of themselves that might make them vulnerable to accusations of hypocrisy or imperfection.

Which leaves me wondering… why aren’t I happy he’s dead? Because, when I look at my own response — even the immediate, uncensored emotional response I had when I first heard the news — there is not even a trace of relief or joy. Bewilderment, yes. But honestly, more than a little bit of cynicism and scorn, as well. There’s a part of me that immediately began to wonder what the “game” was that the government was playing this time, how they would turn the event to their advantage, and to what extent the killing of bin Laden was carefully orchestrated for calculated purposes. The seeming rush to dispose of the body, the lack of evidence or corroborating story from any sources outside the U.S. government, and now the rapidity with which the “official story” seems to keep changing, sparked my inner Conspiracy Theorist.

I’m not proud of that fact. I like to think of myself as a rational person, an intelligent and well-informed person (as much as any individual can be well-informed in the rising, chaotic flood of information and trivial details that inundates us every day and makes it hard to find any sure footing on the firm ground of common sense). I have a mind that likes to seek out patterns and underlying currents, and sometimes that serves me well. But indulging in conspiracy theories is a slippery slope. I know that, too.

What bothers me more is that my cynicism seems to have the upper hand over my compassion and empathy. It is hard for me to see in the fist pumping and celebration of other Americans right now little more than a bunch of woefully ignorant suckers taken in whole-sale by the propaganda machine. Folks going on and on about just how important bin Laden was — how “cutting off the head” could effectively end terrorism against the U.S., or at least act as a critical blow — try my patience.

Maybe it just shows how deeply suspicious and deeply, sorrowfully angry I am at the government for its actions over the past decade-plus. Since I’ve been old enough to pay attention to politics on a national and global scale, it seems things have been in a long, downward spiral towards injustice, inequality and violence. And at the same time, it seems every day I learn some new bit of history that makes me question if things are really getting worse, or if I’m just slowly discovering how bad they’ve always been. And that’s what hurts the most. The feeling of betrayal, the anger I feel towards those who came before me — you should have told me! you should have done something! you should have remembered and learned from the mistakes of the past! I do not feel joy or relief over bin Laden’s death… I feel indifferent. The monsters I’ve struggled against for most of my adult life have been monsters of our own making, the myopia and arrogance that every day shape the decisions of my own government, the casualties and “collateral damage” of the actions and reactions of my own country.

I feel cynical and heart-weary and worn not by any foreign enemy, but by this culture and country that I live in, precisely because I do live in it. Maybe there are awful people out there who want to kill us — but what does that have to do with me? It is the violence and war of my own people, carried out in my name and for my benefit, that weigh most heavily on me. Thinking about it makes me want to cry.

And trying to love us is more challenging to me than trying to love “Them.” I have so much practice in loving Them, the Other, the demonized enemy, and the dead. And besides, they are so far away, so removed. It’s much harder for me to forgive the people sitting next to me in the coffee shop talking jovially of war and vengeance. It’s much harder for me to love the people full of life and complication, celebrating in relief in the streets and on the news. It’s harder for me to appreciate and sympathize with their sense of new hope and renewal and possibility now that their nightmare has been vanquished… knowing that that’s all it was, a nightmare of their own making. It’s so much harder not to feel resentful and bitter, burdened with the responsibility of making up for their acts of aggression or arrogance or ignorance.

So I am not happy that bin Laden is dead. But I want to strive to be grateful for the insight that his death and its aftermath might bring, and to have more compassion for others whose nightmares have held them in a tight grip of fear for so long, who now finally feel they can breathe. That is something worth celebrating. I want to strive to understand the people I live with, the culture I am a part of, to understand even if I cannot agree. Because if I can’t understand, how will I be able to help? How will I be able to reach them if I can’t reach through my own anger and cynicism? How can I cultivate attending and attention if I don’t start with those closest to me?

I don’t have any answers — only more questions. What was your reaction to the news? How does your joy, or your sadness, or your anger, or your ambivalence speak to your engagement with the world? And what do you plan to do about it?