It was her sixth birthday, and my youngest stepdaughter was standing in the middle of the toy store looking like she was attending her own funeral.

“What’s wrong?” I asked her. All I got back was grumpy silence.

This was a special trip for us — to one of those quirky, locally-owned toy stores that is proudly eco-friendly, aggressively gender-neutral and unabashedly educational — and I’d told her she could pick out anything she wanted as a birthday present. At first I’d worried that she wouldn’t be able to find anything she liked, that maybe her tastes as a six-year-old had already been firmly corralled by American consumer culture into the pink-Barbie-fashion-princess phase that every little girl apparently has to live through, if only to get it out of her system. But we’d been there for twenty minutes and she’d already considered half a dozen choices with enthusiasm, taking each one carefully off the shelf and turning it over in her hands, imagining out loud how much fun she’d have with this doll or that board game or one of these books…. Now she just stood there looking somewhat morose, and I as the still-very-new-to-stepmothering stepmom was starting to feel antsy.

I tried encouragement. “I think that doll looks awesome. He’d make a great friend for your teddy bear… Is that what you want to get?”

“Did you like the Make You Own Silly Slime kit better? Maybe you want that instead?” I saw the look of tortured indecision cross her face again as she glanced towards the Science Is Fun aisle.

“This isn’t fair,” she accused me. “Every time I think about picking one, it feels like I’m missing out on all the other ones I want. It’s like you’re taking them away from me.”

Her older sister, who’d tagged along for something to do and was also starting to get antsy by this point, chimed in with annoyance: “That’s stupid! If you take much longer, Ali’s going to change her mind and then you won’t get anything — so just pick something already!”

From the mouths of babes.

There is a famous philosophical paradox known as Buridan’s Ass, in which a hungry donkey finds himself exactly halfway between two identical stacks of hay and, being unable to choose between them, stands there until he starves to death.

The ridiculousness of this scenario is adorably poignant when played out by a sweet little six-year-old on her birthday. Of course, she did eventually choose just one toy (though I’ll be damned if I can remember which one it was, and I’d bet that she doesn’t either, which only goes to show).

Some philosophers have pointed out that no real-live, non-allegorical donkey has ever died of such indecision — eventually, the very palpable hunger pangs compel even the dumbest donkey to act. I try to imagine conducting this experiment with my parents’ dog to see which bowl of food she would choose, but I have a feeling the results would be an inconclusive hurricane of slobber and tail-wagging, with both bowls empty before they ever touched the ground. Which only goes to show. 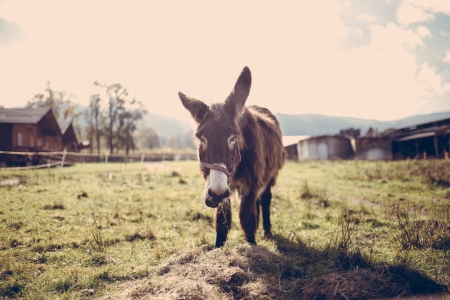 We humans like to think we are so much smarter than donkeys. Still there have been plenty of times in my life when I’ve faced just such a situation and almost made the same mistake as Buridan’s Ass. This philosophical paradox is meant to illustrate the nature of free will: when placed between two options that are perfectly equal in every way, it is our freedom, our very ability to choose one or the other, which breaks the tie. But if we know that two choices are equal and it doesn’t matter which one we pick so long as we make a choice, why do we ever get stuck in this stalemate in the first place?

Intelligence can only take you so far when you’re bogged down by fear — fear of loss, fear of making the wrong decision, fear of the consequences of claiming your own power to act in the world and owning up to all of the wild possibilities that spiral out from that act. We are perhaps a bit too intelligent for our own good: able to imagine all the futures in potentia that await us, we conjure up whole alternate timelines with every roll of the die. We recognize at an instinctive level that no two choices are ever truly equivalent; if they were, there would be no choice. We know that each path will lead us on a unique journey with twists and turns that we can only guess. We know, deep in our squishy guts, just how little we actually know. And so we wait… hoping that some new information will come to light, that one path will call to us as the clear and obvious right answer. We wait for the universe to step in and take away the need to decide. And if it refuses? We might find ourselves waiting forever.

It’s tempting to lecture like a big sister and say: Snap out of it! Make a decision already, before you lose everything! We could go on pretending that life is a rom-com chick flick about a guy who’s afraid of commitment, caught between the enticing stranger and the girl next door, and by the end credits we’ll all have learned a valuable lesson about friendship.

But that’s not where I’m going with this. What I want to do is shift the conversation. I think our real problem is not that we are more or less scared of commitment, or that commitment is more or less difficult for some folks than others. I think what we struggle with at the deepest level is our fear of all that we have to lose.

This fear is built right into the word: decide, from the Latin meaning literally “to cut off” (de- “off” + caedere “to cut”). Every decision, it seems, severs us from the infinity of the possible and forces us onto a narrower path where our options will be more limited and our actions restrained. In trying to make a wise decision, we might distance ourselves emotionally or intellectually in hopes of avoiding bias — bias, from Old French meaning “slant, slope, sideways,” possibly related to the Proto-Indo-European *krs-yo-, from the root *(s)ker- meaning “to cut.” We might try to determine which decision is best through careful analysis — analysis, from the Greek meaning “a breaking up, a loosening, releasing,” tracing back to the PIE root *leu- “to loosen, divide, cut apart, untie, separate”; and determine, from Latin de- “off” + terminare “to mark the end or boundary,” from terminus “end, limit.” The evolution of our language doesn’t pull any punches: when faced with a decision, we are practically obsessed with separation and loss.

With such an obsession, by focusing on the necessity of commitment — lest we lose everything and/or die alone — we only exacerbate our fears. No wonder every rom-com ends with a marriage as surely as life ends with a funeral.

But if the lesson of Buridan’s Ass is to remind us of our freedom, what I propose is a radical reversal of this perspective: to give up this notion of decision-making in favor of the more liberating and empowering concept of choice. Choice, from the Old French choisir meaning “to recognize, perceive, see,” related to the Old English ceosan “to seek out, select; to test, taste, try; to accept, approve.” From the PIE root *geus- “to taste, to relish.”

Words have power. What a world of difference a single word makes! To take the step from decision to choice is to shift our focus from loss to enjoyment, from separation to engagement. To choose is to express not only our freedom, but also our joyful and sensual embodiment in the world: we see and taste and touch, we recognize and reconnect, and we relish that connection. Choice engages our sense of curiosity and experimentation: we test and try, and try again. Every choice is a new opportunity to learn and explore, opening up unexpected possibilities, rather than a decision that cuts us off from all but one option. Choice cultivates gratitude, shifting our attention from what we fear to lose to what we value and appreciate, what we long for, what we seek out because it calls to us. Choice is creative and generative, even as it encourages acceptance and affirmation of the world as it is.

This is the magical power of choice. For we can exercise it even in situations where we feel we have no control over our external circumstances. To make a choice is to perceive a connection, to affirm a relationship — whether it’s with a teddy bear, a slime mold or a spouse, a career or a casserole. At the heart of our freedom to choose is our recognition of the myriad unique relationships that draw us together and weave us into the world. Even when it seems like we have no alternatives and our path is set in stone, we can choose how to walk that path in relationship with others — to walk with curiosity, mindfulness, and passionate engagement. We can say yes to the world as it is with as much authenticity as we can muster. We can say yes to whatever twists or turns we encounter, eager to discover what’s to come rather than haunted by an unchangeable past.

We can even say yes to our own indecision. We can see our stillness as a choice to be present, to be patient. We can accept our own insecurity or uncertainty or ignorance, to hold ourselves open to whatever possibilities may arise when we least expect them. Maybe the last fear we have to overcome is that our own indecision is an unforgivable loss, a missed opportunity. But we cannot unweave ourselves from the world of relationships. No choice is ever final, because these relationships are always changing in response to the shifting circumstances of our daily lives, both those beyond our control and those of our own making. Every moment is a new chance to choose again, to shift our focus, to see and accept and relish the place that we find ourselves in. So don’t worry — even in this topsy-turvy world, the guy can still choose the girl next door, we can all learn a valuable lesson about friendship, and even the dumbest donkey doesn’t die.

3 thoughts on “Relishing Choice: How Not To Be An Ass”